Manufacturers rely on machine vision cameras to monitor processes and ensure product quality. While for some processes, a visual camera provides the coverage needed to catch errors, there are many times when the visual spectrum simply isn't enough. For example, visual cameras can't see that an injection mold isn't hot enough to form the product correctly or that an opaque bottle wasn't completely filled in the production line. Even simple automated pick-and-place tasks can run into challenges if the product a robot arm is supposed to pick up is the same color as the background behind it.

In these cases, thermal imaging cameras can be a practical solution. These cameras detect infrared radiation—heat—and use it to create an image, with different colors representing temperatures across the scene. When pointed at a line of opaque bottles, such a camera will immediately show which one isn't completely filled.

A thermal camera pointed at a paper roll in a production line can help verify it is being heated and dried evenly across the roll. 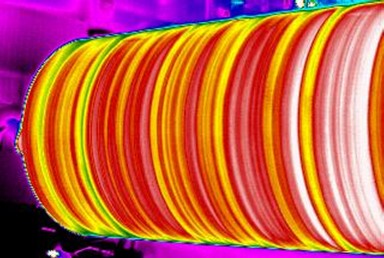 It can even help prevent accidents, such as a customer taking delivery of a keg still filled with cleaning fluid (lye) instead of beer. As a keg containing lye has a considerably higher temperature than one with beer, continuous monitoring of temperatures makes it easy to avoid mistakes. 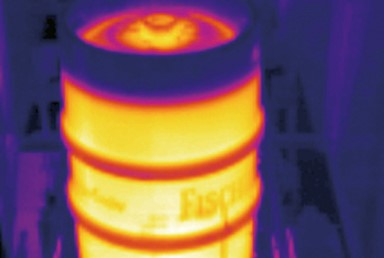 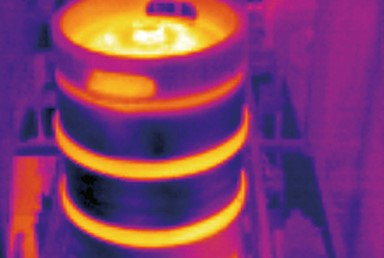 A fixed-mount thermal imager such as the FLIR A50/A70 Advanced Thermal Image Streaming Camera can repeatably and accurately illustrate the thermal patterns and gradients needed to help quality control engineers find and correct errors in the production line, preventing the output of defective products.

This system can measure temperatures from -20°C to 1000°C (-40°F to 3632°F) with up to ±2°C (±3.6°F) accuracy. it's GigE Vision and GenlCam compliant for camera control and thermal/visual image video streaming over Ethernet into third-party machine vision applications. The A50/A70 Series offers two pixel resolutions (464 × 348 or 640 × 480) and a range of fields of view (29°, 51°, or 95°) on fixed lenses that you focus manually for a consistent view. When paired with the optional built-in visual camera, the A50/A70 can produce FLIR-patented MSX® images that are easy for anyone to interpret.