There’s no official standard for rating how good an IR camera is at detecting gas leaks. Noise Equivalent Concentration Length is a useful method to measure the quality of a camera.

Optical gas imaging (OGI) is increasingly being used in the oil and gas industry to
detect leaks. Operators of gas distribution networks, processing plants, pipeline
facilities, terminals, and offshore platforms all want to find and repair leaks to prevent explosions, minimize loss of their product, and comply with environmental and safety regulations. OGI provides a straightforward and affordable method to visualize plumes of gas that would otherwise be invisible, allowing companies to trace and repair the source of the leaks.

This imaging technique, which relies on thermal cameras that measure changes
in infrared (IR) radiation as it passes through gas, is still relatively new and no official standard exists to characterize how good a job any particular camera does at detecting leaks, or to say how small a leak a given camera can find. A standard that would makes sense is Noise Equivalent Concentration Length (NECL), which is a measurement of how much gas over a path of a certain length can be detected above the intrinsic noise of the camera. The NECL is easy to measure, is similar to another familiar measurement, and provides a simple way to compare the performance of different cameras.

OGI works by measuring the IR radiation passing through a volume of gas. Any gas
has its own spectral absorption characteristics. When there’s a temperature difference between the cooler gas and the warmer background, light at certain wavelengths passing through the gas is absorbed. For example, natural gas, or methane, absorbs light at 3.3 ± 0.1 μm and 7.7 ± 0.1 μm.

Other hydrocarbons common in the oil and gas industry – propane or butane,
for instance – have their own individual absorption spectra. If instead the gas is
hotter and the background is cooler, the gas then emits rather than absorbs at
certain wavelengths. If you’re looking for natural gas leaks, it’s a simple matter to use the IR camera to measure how much of the radiation is being absorbed
by gas in a given volume of air. That tells you the concentration of the methane in that area. At the same time, the camera can visualize the gas by noting the temperature difference between the gas and the background, thus providing an image of the gas plume.

An older technique for leak detection, Method 21, also provides a concentration
measurement in parts per million (ppm) using so-called “sniffers.” Method 21 measurements are made by sucking a small volume of air, with the gas mixed in, into an instrument that uses a chemical sensor or IR detector to check for gas. The limitation of this technique is that it is a spot measurement and can only provide the concentration in a particular place. It does not tell the user anything about the way the gas is flowing or the direction it’s coming from, which is important information
for finding the source of the gas. The visual nature of OGI provides that information,
making it easier to find and fix leaks. It also allows inspection of a wider area at a time, because it can look at a whole scene rather than measure in just one spot.

So the NECL of a camera gives the concentration of gas over a given path length that is undetectable above the intrinsic noise of the camera.

A Measure of Sensitivity

If sensitivity is the aim, a lower NECL is better. But there can be trade-offs. As noted, different gases that might be of interest to users have different spectral absorption signatures, so even with the same concentration length and temperature difference, they produce different NECL values. A broadband camera could visualize several gases, but the NECL would not be as good as in a camera
optimized for, say, methane.

Lowering the noise lowers the NECL and makes the camera more sensitive. But lower-noise, higher-sensitivity detectors, usually cooled detectors, are more expensive than uncooled detectors with higher noise. With NECL, a user can compare cameras at different price points to see which is suitable for his or her application. When a user knows what NECL is needed, a manufacturer will be able to design cameras to specific needs and optimize the balance between price and performance.

Another benefit of using NECL as a standard is that it provides a way to be sure you’re checking for small enough amounts of gas. For a gas like methane, there is a known lower explosive limit, the concentration of gas at which there is a danger of ignition. NECL will tell you whether the camera in question can detect the presence of methane down to that limit. In a similar vein, some gases are toxic above certain concentrations. For instance, the extraction of methane can sometimes also capture fluoronium, a compound of hydrogen and fluorine that is extremely corrosive. It can be dangerous at concentrations as low as 10 ppm, so detecting it would require a camera with a very low NECL.

The measurement setup for determining the NECL of a camera is fairly simple and
consists of three main pieces of equipment. This setup requires a blackbody radiator that has high uniformity and can produce a stable background temperature of approximately 30° Celsius. The second piece is a gas cell filled with a calibration gas and a sensor to measure the temperature of the cell wall.

A third instrument can measure the air temperature and relative humidity.

The user can surround the setup with simple foam screens to reduce reflections from any warm objects or people in the room, then let everything settle into a thermal steady state. They then record at least 150 images over 10 seconds. Excluding the noise from the camera, the NECL is a function of the temperature difference between the cell, the gas, and the blackbody radiator, the concentration of gas in the cell, and the absorption properties of the gas. Evaluation programs in Matlab can handle the data produced. With such a setup, users can compare the performance of different cameras and perform tests as often as they want to confirm repeatability of their measurements.

Another potential standard for measuring the performance of OGI cameras is the minimum detectable leak rate. That depends on the operator of the camera determining the smallest leak he or she believes can be seen, and it depends on the temperature contrast setting in the camera, the quality of the display, and the operator’s visual acuity, making it rather subjective. 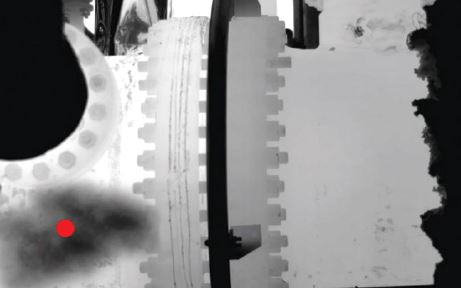 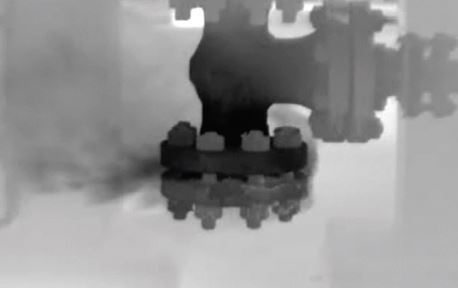 On the other hand, NECL is an objective measure. It measures the average concentration of a gas over a given path length and tells users whether the absorption signal that gas produces is greater than the noise intrinsic to the camera, a useful way to characterize a camera’s performance. It is easily obtained
with a simple setup, and it allows users to compare the capabilities of different
cameras. It also allows them to select the requirements for their camera based on their application, including which gases they need to detect and at what concentration. As a standard, NECL can be very attractive to people in the oil and gas industry who need to perform optical gas imaging.