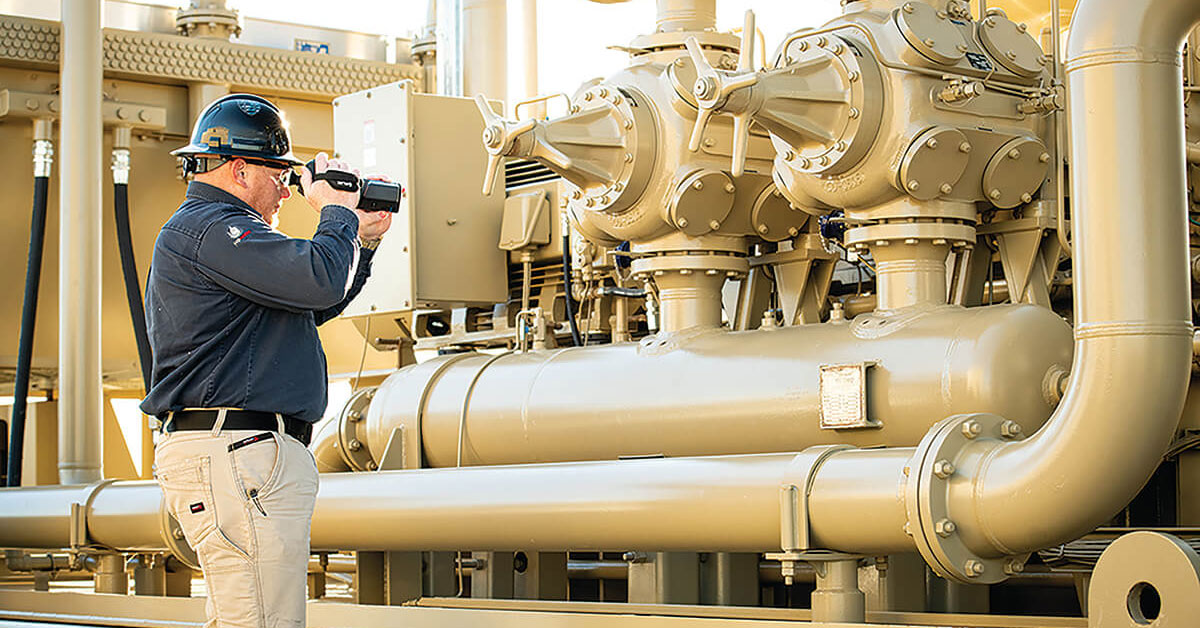 Safety must be a core value of any operation dealing with potentially hazardous gases. While a practitioner of safety within the organization may set protocols or procedures, buy-in from all levels is critical to create a culture of safety and avoid issues where a serious lapse in safety might occur. Organizations that work with gas should seek to integrate effective technologies into protocols which will ultimately help ensure safe operational practices.

Recent advancements in Optical Gas Imaging (OGI) technology offers companies in a variety of industries the opportunity to help safeguard employees while also bolstering a culture of safety. For example, OGI cameras from FLIR can be used in upstream and downstream oil and gas operations, along with power plants and other industrial facilities to help organizations meet their safety objectives. 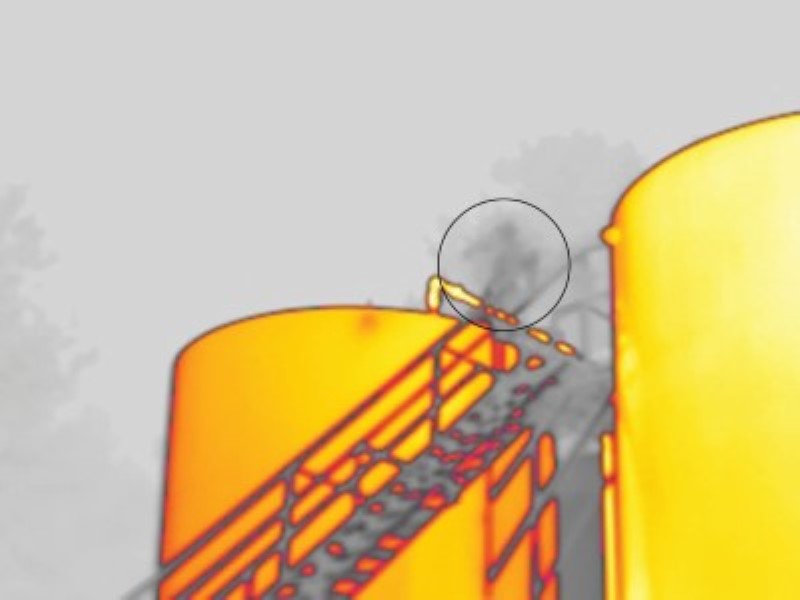 Emissions from atop tanks are commonplace in upstream natural gas operations. When gauging tanks, operators could be standing in a gas cloud.

IMPLICATIONS OF SAFETY EQUIPMENT FOR CULTURE

Many common safety practices depend upon safety equipment that operates solely within an area of relative unsafety. The wearable gas monitor plays an important function in protecting workers, but it only warns of a danger once the person wearing it is standing in a cloud of gas. There are several other technologies that allow operators to find an unsafe condition within a piece of equipment, but few of these operate until the user is within that unsafe condition. This holds true for low-tech but prevalent safety tools: namely, the common soap bubble. In sum, these technologies and their results could send a cultural message that some risk is acceptable and perhaps inevitable, contradicting the message of safety. Just as certain safety tools carry an apparent inevitability of personal risk, so do some routine safety tasks. A prime example from the upstream oil and gas sector is the practice of tank gauging. Employees must scale a ladder and walk out onto a catwalk in order to extend a dipstick into the liquid. The worker stands directly over a tank, where a potentially high concentration of gas emissions may lurk undetected. Downstream, the risk profile changes. Many of the hydrocarbon gases in refineries are more toxic than those present at upstream facilities. As a result, an employee who unknowingly enters an unsafe area could face more pronounced negative consequences, or negative effects in less time. A prominent method for detecting unsafe gas levels in this context are wearable gas monitors.

Even the most common safety monitoring equipment invites a level of uncertainty. A wearable gas detector begins to beep: Is the wearer at the edge of a gas cloud, or at its center? In which direction should the wearer go to get out of the hazardous area? More importantly for remedying unsafe conditions, where is the exact location of a leak? While these technologies may be good at detecting the presence of gas, they have their drawbacks. Using them could encourage, to some extent, a cultural feeling that close enough may be good enough. 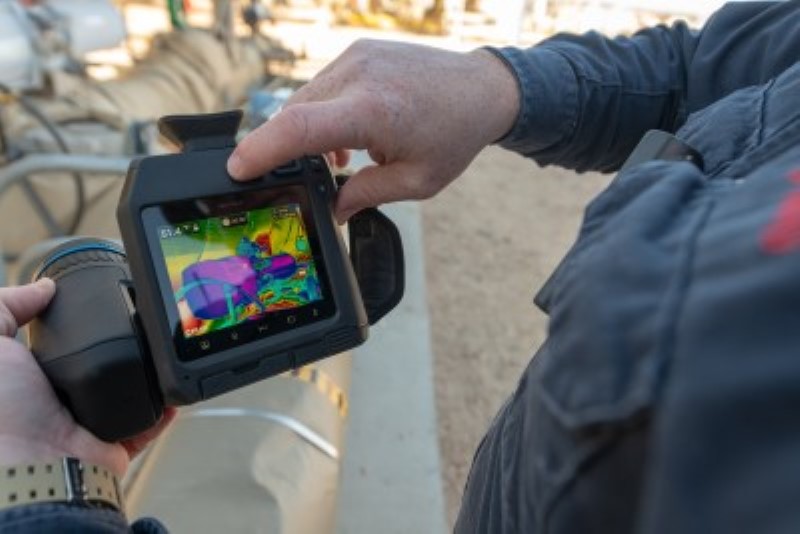 Images and videos from OGI devices such as the FLIR GF77 can provide a fact-base for troubleshooting safety and operations issues.

Historically, OGI technology has been viewed through the lens of compliance. In order to meet regulatory parameters and identify emission sources, companies invested in OGI resources. Now, more and more oil and gas leaders are adopting strategies to voluntarily reduce emissions to stem climate change. The CEO-led Oil and Gas Climate Initiative, for example, includes thirteen major corporations. In the United States, the ONE Future Coalition has set a goal to reduce emissions to one percent by 2025 across the natural gas supply chain. OGI provides an effective and efficient leak detection technology for many gases targeted by these efforts, particularly methane. In this way, OGI contributes to operational safety and safeguards the environment. Utilities and oil and gas companies have begun inspecting components with OGI that do not fall under regulatory requirements to reduce emissions at more points. A partial driver of this broader role for OGI is a major reduction in the cost of high-quality imaging systems. Uncooled infrared imaging devices, such as the FLIR GF77, are available at a vastly reduced price-point when compared with cooled OGI models. This affordability, along with the willingness to leverage OGI in new ways, has led organizations to rethink the relationship of safety equipment to personnel. Traditionally, a Leak Detection and Repair (LDAR) team alone would use OGI, with the possibility that the Environmental Health and Safety (EHS) team might have access to the technology at some facilities. Now, the lower price-point of handheld OGI devices allows more workers, such as maintenance repair technicians, to utilize the “sixth sense” of gas detection, giving more members of an organization a valuable tool in evaluating the safety of their workplace.

THE INHERENT SAFETY OF DISTANCE

A primary safety benefit that doubles as a safety culture benefit is the visual range of OGI cameras. Unlike other tools, an OGI camera offers the ability to visualize unsafe conditions from a safe distance. Equipped with OGI, refinery employees can judge whether an area contains a toxic gas build-up, sparing them exposure to the gas that would be required to set off a wearable, beeping gas monitor. Likewise, workers tasked with gauging large tanks can assess the emission characteristics of the tank before placing themselves in any potential cloud. With OGI, employees in this situation can easily scan in the direction of the wind flow, giving them the opportunity to select a safer position on the catwalk or, if no gas is visible, give an all-around “all clear” for safer measurement. OGI gives employees actionable, precise information about the hazards that exist in their immediate surroundings, without endangering personnel. 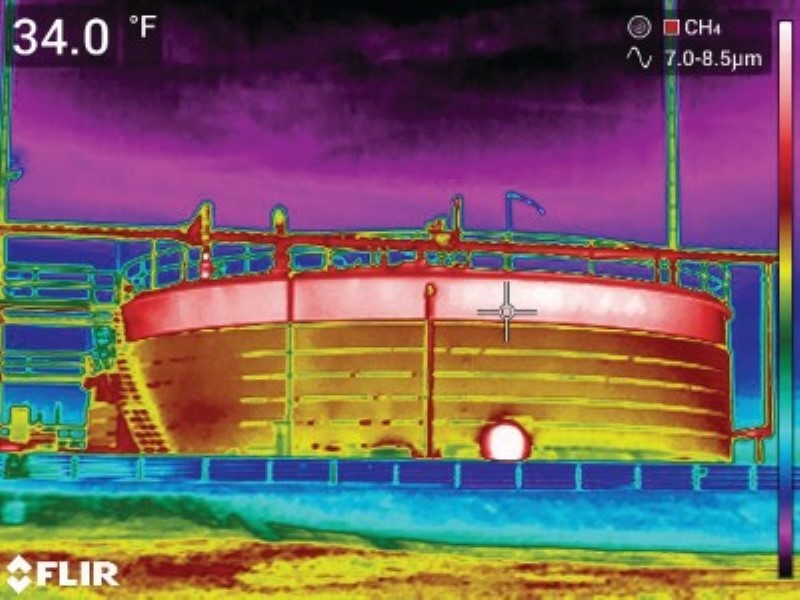 Optical gas imagers, like the GF77, can inspect tanks for gas leaks and gauge the levels of product in the tank from a safe distance.

OGI FOR ANALYSIS IN THE CONTEXT OF A TEAM

OGI also contributes value from an analysis and teamwork perspective. By comparing results from cameras, operators can identify consistencies between components that are failing in an operation to discover root causes to issues. For example, OGI could produce evidence that enables users to discover an incorrect parameter such as pressure. Or, perhaps a certain type of component consistently fails within an area. Because cameras like the FLIR GF77 are calibrated to measure temperature, they foster multivariate troubleshooting that can aid problem-solving. OGI also provides data that’s not possible with traditional gas detection equipment, empowering communications between team members with facts to easily reference. In particular, OGI videos are worth more than a thousand words for personnel. Videos give users a tool to easily highlight unsafe practices within an organization. 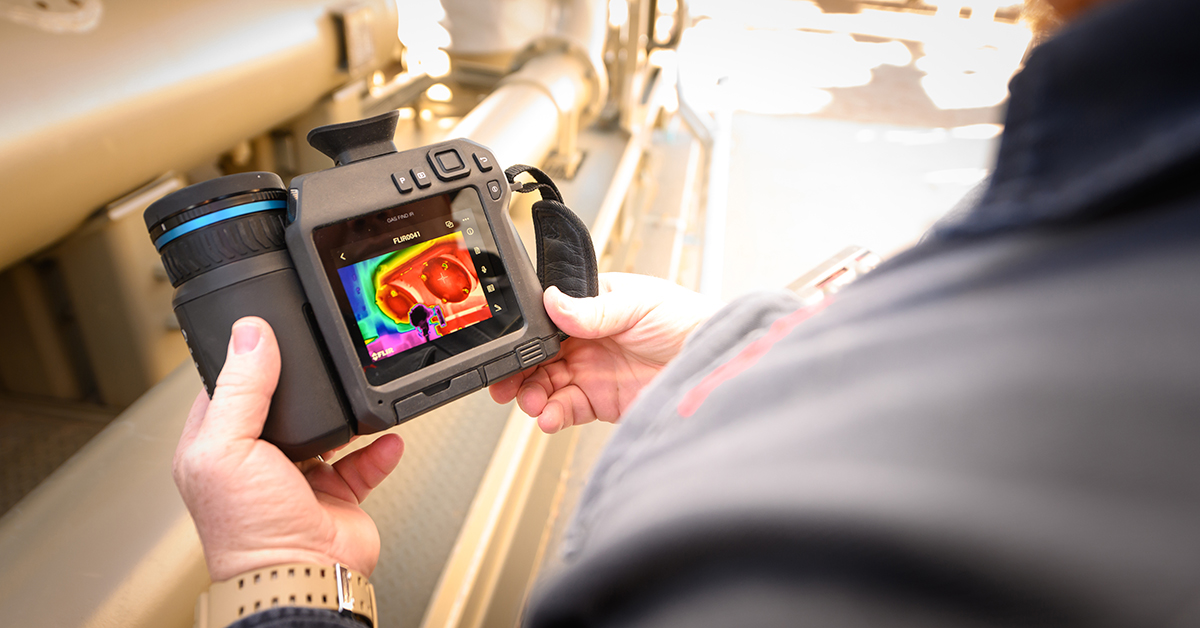 The FLIR GF77’s LCD touchscreen allows users to adjust images for better visualization, and its Wi-Fi communication protocol gives users the ability to immediately inform others of a hazard via smartphone to expedite the repair process. OGI Strengthens Safety Culture The new affordability of OGI technology not only enhances safety monitoring for oil and gas applications, but also strengthens an organization’s culture of safety. OGI protects personnel by showing the safety threat from a distance, before a worker is in harm’s way. It empowers any user to establish the facts of an unsafe situation in order to seek a swift remedy. Plus, as more personnel carry the capability, more vigilant eyes can contribute to the safety of an operation. These benefits are not exclusive to upstream and downstream oil and gas facilities. The lower price-point of quality equipment allows new industries to make use of OGI as a tool for environmental stewardship and safety. In addition to the natural gas company, power plants that turn natural gas into electricity can use OGI to protect employees and operations from undetected leaks. Utility companies are now purchasing OGI cameras for this purpose, beyond using the technology for compliance only. In the same way, renewable energy companies can use OGI to monitor gas, locate leaks, and improve the culture of safety.