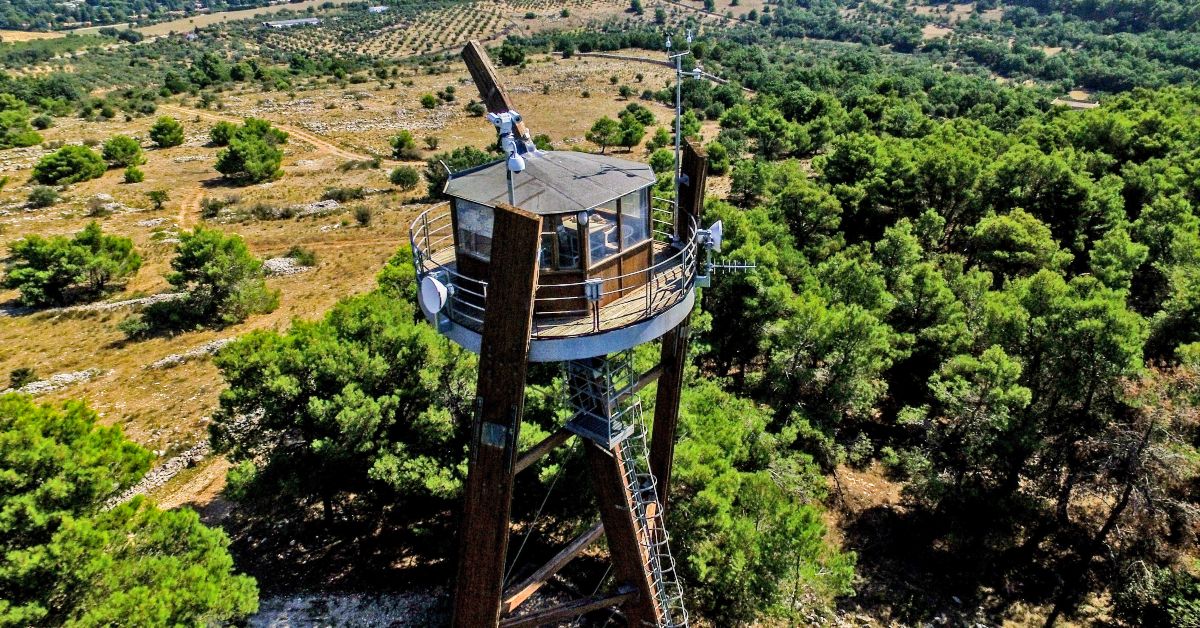 The FLIR Triton™ PT-Series HD thermal cameras are the centerpiece of an effort to protect the forests of Alta Murgia Park, in Puglia, Italy.

The Puglia region of southern Italy contains unquestionable beauty, including 35,000 acres of forestland. Preserving the region’s natural resources, specifically within the sparsely populated area of Le Murge, is not an easy task for government agencies, due largely in part to the complex terrain, high temperatures, and scarce summer rainfall. Spontaneous and man-made forest fires severely threaten Puglia’s ecosystem.

Despite efforts from volunteers and professionals to protect the territory, multiple cases of arson cause extensive damage to natural resources and the economy each year. As a result, the Regional Agency for Irrigation and Forest Activities (ARIF) of Puglia implemented remote control technologies to supplement the efforts of volunteers and staff and keep forest fires under control.

Forest fires are one of the most serious threats to the ecosystem in the Italian region of Puglia.

Detecting forest fires is no easy task. Outbreaks can start in locations obscured by ridges or embankments, and often spread before human lookouts can take action. Seeking an effective and economical solution, the ARIF put out a call for advanced forest monitoring systems, resulting in bids from five different companies.

After a lengthy analysis phase, CAE, a systems integrator with extensive experience in environmental protection, was selected as the ideal partner to implement a network of thermal cameras dedicated to early fire detection.

“Taking advantage of the best technologies currently available on the market,” says Luca Papandrea, Operations Manager at CAE, “we proposed a solution that includes FLIR cameras and our own softwarebased core program developed by the Spanish company SR7, which has already been used successfully in other projects abroad.”

Rather than using “radiometric” thermal imaging cameras capable of providing the temperature of objects at a distance without physical contact, CAE chose “thermographic” thermal imaging security cameras. Video from the cameras is analyzed by smart software that detects fires in their earliest stages without the need for visible smoke or flame. 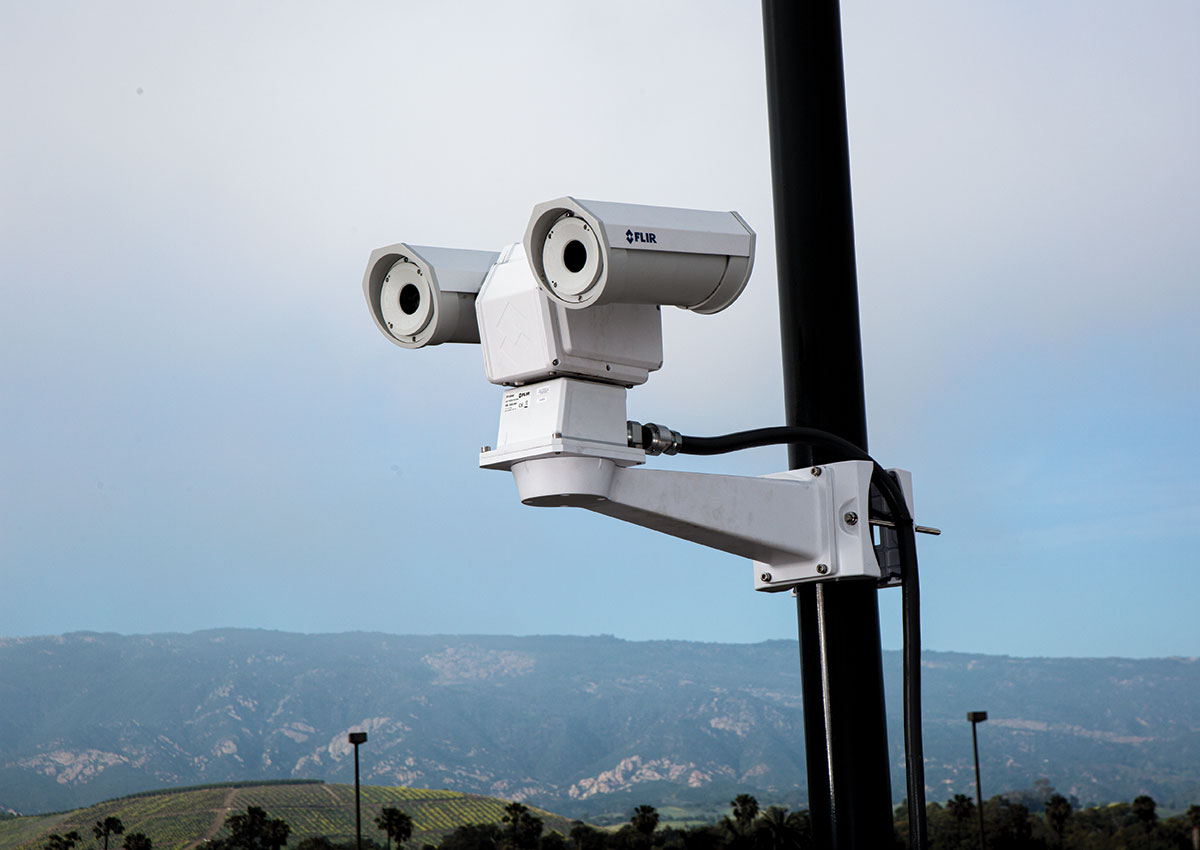 FLIR PT-Series HD cameras are a key component for fighting fires in the region.

The data from the cameras is streamed to an operations center where software continuously processes the data, automatically monitors the territory (mapped using a GIS system in the center’s computers), and alerts the staff with an alarm if anomalies occur.

CAE installed six complete stations, each equipped with a FLIR Triton™ PT-Series HD thermal/visible-light camera, a weather station, and a solar power array. Each station also has a transmission system consisting of a speciallydesigned microwave communication network, plus a backup network on the UHF band and GPRS.

“Each station covers a radius of about 15 kilometers,” explains Papandrea. “The complete network, which also includes two repeaters, enables us to monitor the entire Upper Murgia area. Thanks to our experience in the Civil Defense sector, we have been able to implement a system that is redundant and operational, without interruption. On the research front, we are collaborating with the University of Calabria to continue to study the dynamics of fire propagation.”

A total of six stations have been installed, complete with a FLIR Triton PT-Series HD, weather station, a solar power array, and a microwave transmission system.

The cameras operate with programmed motions, monitoring the territory using both infrared and visible light imaging. Any sign of trouble will trigger visual and audible alarms within a staffed control center. Operators, observing live images and reviewing moments leading up to the event, may then decide whether to confirm the alarm and contact the teams in the area.

The integrated thermal imaging system has already saved thousands of acres of forest all over the world. “This is the first time it has been implemented in Italy," says Papandrea. “The initial tests confirm that the regional authority has taken an innovative and far-sighted approach by choosing our solution. The system has proved to be reliable, reducing false alarms to a minimum and demonstrating that it is also very effective in the intervention phase—in fact, the software makes it possible to predict the direction of fire propagation, so as to direct the intervention of the teams in the field.” 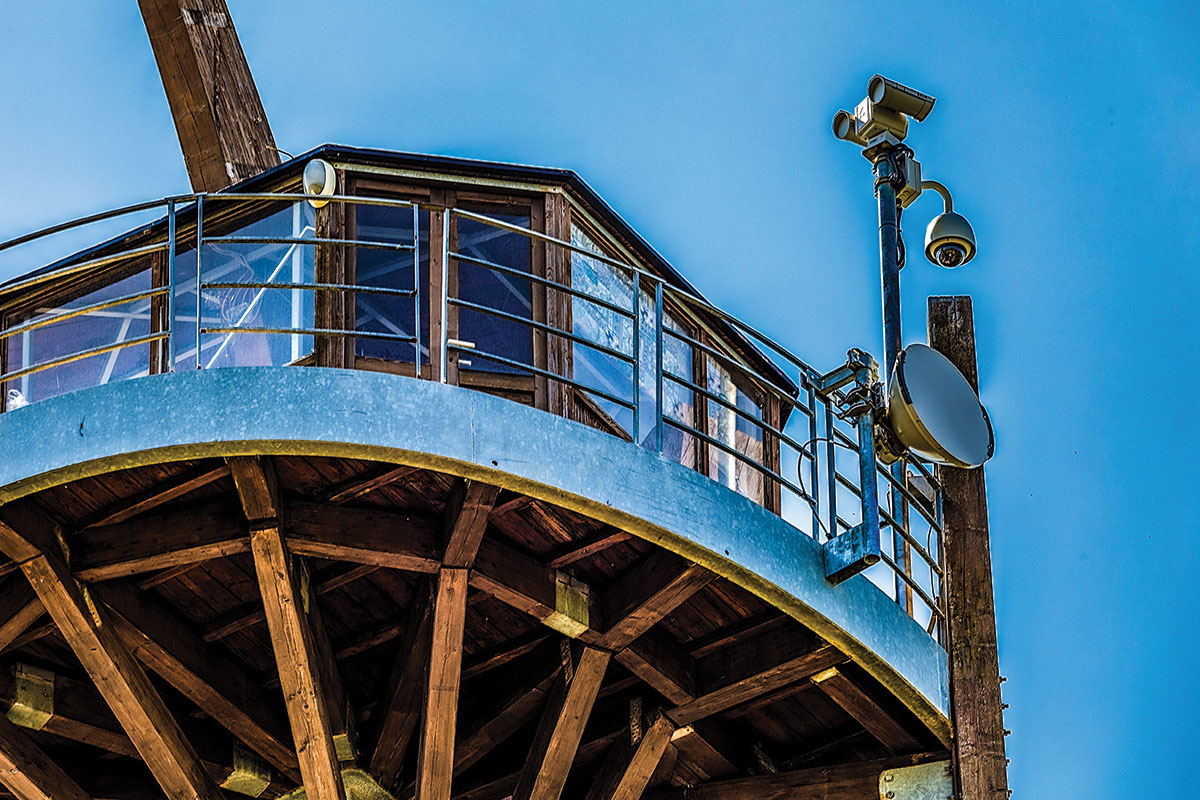 While the existing solution has seen early success, the system will allow for future advancements, from thermal imaging-equipped vehicles to premium monitoring stations outfitted with cooled, high-performance thermal cameras such as the FLIR Triton™ PT-Series HD.