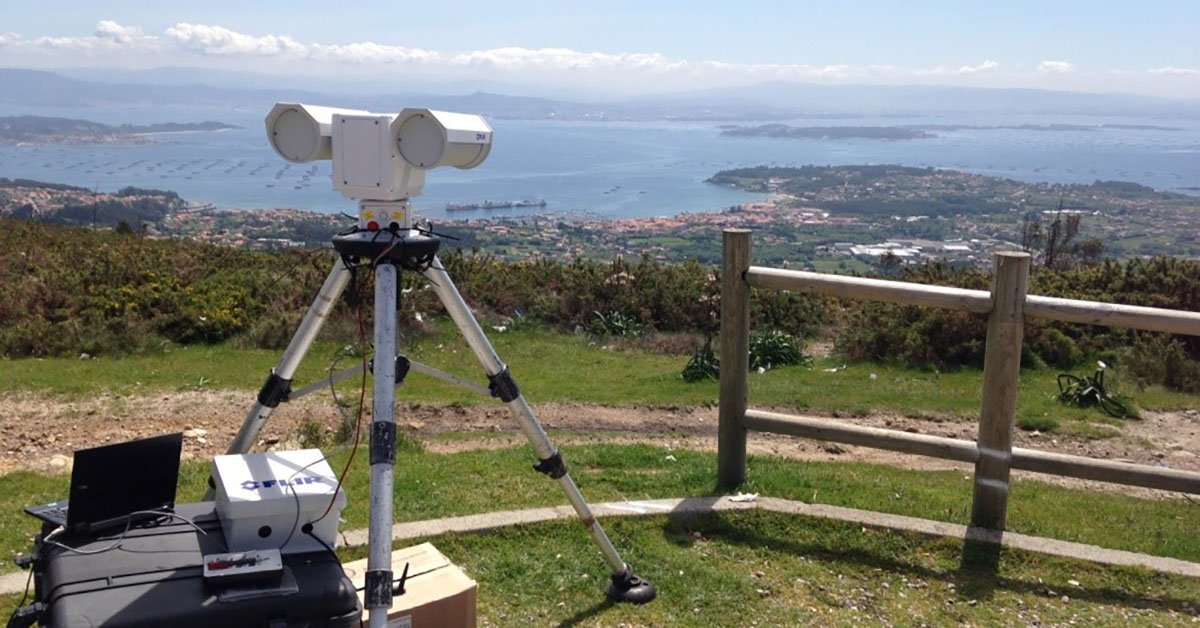 FLIR PT-Series cameras were used in a surveillance project to detect and monitor illegal fishing and poaching activities along the Spanish Galician coast. The FLIR thermal imaging cameras combined with maritime video analytics from Gradiant were ideal for spotting illegal vessels on a 24/7 basis and at a long range.

Fishing, shellfish harvesting, and marine aquaculture – mainly mussel farming in inshore waters are important economic activities in Galicia (northwest of Spain). Local public authorities strictly control these activities to prevent exploitation, fish stock depletion, and resulting economical losses. They are fighting a constant battle against this unfair and illegal competition that affects thousands of professionals who make a living from the fishing and seafood industry.

Illegal fishing and poaching of seafood resources also has an enormous impact on the environment and food safety, especially during periods of toxic algal bloom (red tides) when fishing conditions are hazardous for public health.

The detection of unauthorized fishing and shellfish harvesting is of paramount importance for the Galician authorities. However, monitoring and protecting all of Galicia’s inshore and offshore fisheries, shellfish harvesting areas, and marine aquaculture farms is a challenging task.

Galicia has 1,200 km of coastline. Its protection involves the surveillance of activity in 122 ports, including around 5,000 fishing boats, 400 beaches dedicated to shellfish harvesting, and 47 mussel aquaculture farms, with a total of more than 3,000 bateas (floating mussel farms).

Moreover, most illegal activity takes place at night, making it extra difficult for law enforcers to detect any type of vessel. The Galician climate does not help either. With an average of 128 days per year of rain, visibility conditions are usually not ideal for surveillance operations.

Manned surveillance patrols can only do so much; they are hindered by the climate and visibility conditions, making it impossible (from a practical and financial standpoint) for coast guards to cover the entire Galician coastline.

In 2017, the Galician Coast Guard started a project to test video surveillance of the coastline based on thermal imaging cameras. The pilot included the use of FLIR’s PT-Series multi-sensor camera, combined with maritime video analytics software from Gradiant (Pontevedra, Spain). The multi-sensor installation was extensively tested on two different locations along the Galician coast. One set-up was used to monitor illegal vessels on coastal waters at short/medium range, while another set-up was used for long-range monitoring. 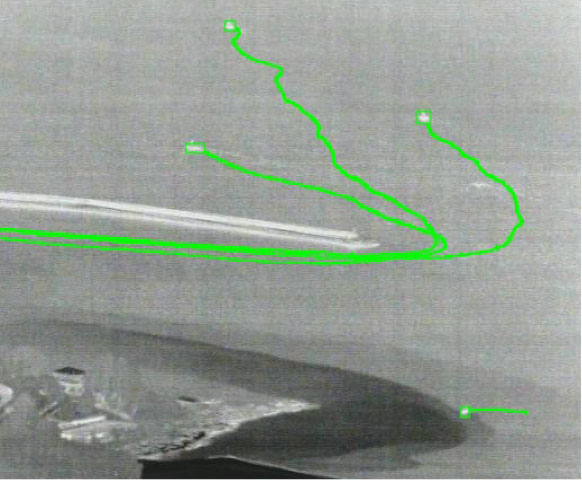 The PT-Series thermal cameras allowed the Galician Coast Guard to monitor the required area over a long range on a 24/7 basis, even at night and in adverse weather conditions. In addition, the FLIR thermal images were enhanced by Gradiant’s intelligent video analytics software for maritime applications. This software is specifically adapted for monitoring coastal environments and allowed the coast guard to detect, track, and geo-localize people and vessels, including small wooden and plastic boats. The software enabled the thermal cameras to detect objects and people despite adverse maritime conditions, such as high waves, low contrast due to low light, fog and rain, reflections on the sea surface, camera vibrations, and the presence of distractors, such as birds and vessel wakes.

The FLIR PT-Series is a high-performance multi-sensor pan/tilt security camera, incorporating an uncooled thermal camera with sensitivity of <35mK and a visible-light camera with 36x optical zoom. While the thermal camera is used to detect threats over a long range based on their heat signatures, the visible-light camera can be used for verification and identification.

“FLIR is the reference for long-range surveillance applications with thermal imaging,” says José Antonio Rodríguez, Head of Video Analytics at Gradiant. “The thermal performance of the camera and the fact that this technology is easy to set up makes it ideal for this type of application. In addition, FLIR supported us from the start for lens selection, calibration of the system and much more.” 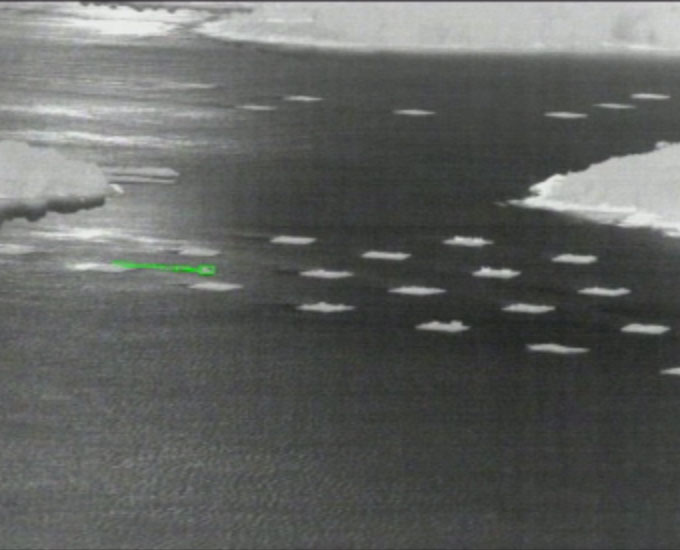 Thermal cameras can detect objects and people despite adverse maritime conditions, such as high waves, low contrast, or the presence of distractors, such as birds and vessel wakes.

“The requirements for this long-range application were extremely challenging for any thermal camera,” says Nikitas Koutsourais, Product Marketing Manager at FLIR Systems. “Thanks to the FLIR PT-Series’ unique thermal sensitivity of less than 35mK, we could provide the best image performance in the market.”

Two different configurations were used in this application. The long-range surveillance station used a FLIR PT-606 camera, and was able to detect a rubber inflatable boat at 4,000m. Despite its narrow field of view, this camera allowed for wide coverage thanks to the high-precision pan/tilt unit. The camera was able to sweep a wide field of view span in a pre-programmed sequence of pan/tilt presets. The port surveillance station used a PT-625, offering a good compromise between detection range and field of view with a single pan/tilt preset.

The integration of the video analytics software with the camera was easy thanks to IP video streaming and the camera’s ONVIF compliant interfaces for pan/tilt control. Long-range surveillance typically requires the use of lenses with a narrow field of view, which is a problem when you want to monitor wide areas. However, the video analytics from Gradiant was able to take advantage of the Preset Sequencing mode of the FLIR PT-Series. This allowed the coastguard to cover a wide field of view with a single camera and to perform video analysis on each pan/tilt preset.

The FLIR thermal cameras provided the Galician coastguard with increased situational awareness and allowed them to respond much quicker to illegal fishing activities. The pilot project was performed in a realistic surveillance environment along the Galician coast and generated very positive results. 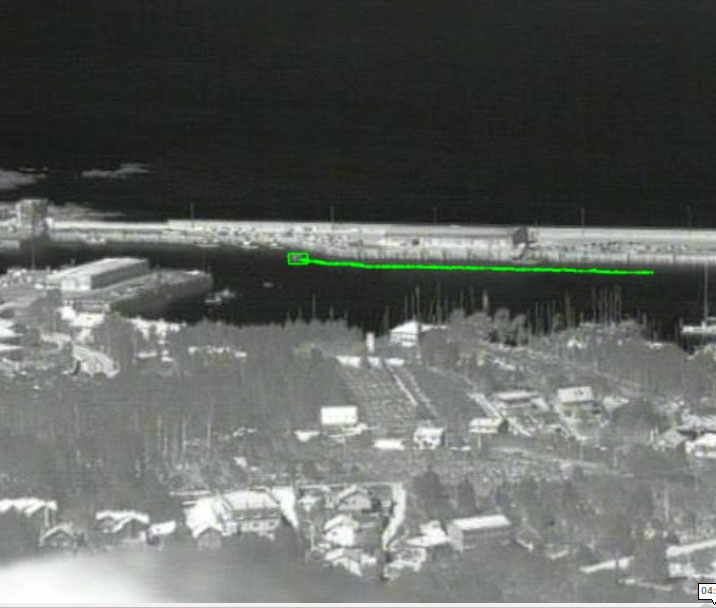 FLIR thermal cameras allowed the Galician Coast Guard to detect illegal activities over a long range on a 24/7 basis, even at night and in adverse weather conditions.

The combination of a multi-sensor system with Gradiant’s maritime video analytics proved to be effective to deal with the intricate Galician coast lines and a lack of open view. In addition, this technology combination is a cost-effective alternative, making automated surveillance applications accessible for fish farm companies worldwide.

Finally, the PT-Series are extremely rugged systems, which makes them ideal for coastal surveillance, especially in an extremely humid environment such as the Atlantic coast of Spain. The system’s vital core is well protected against dust and water ingress, and complies with IP66 requirements.