To learn more about the new smartphone and what it means to FLIR, we asked FLIR’s Sr. Vice President of Product Strategy, Jeff Frank for the details. 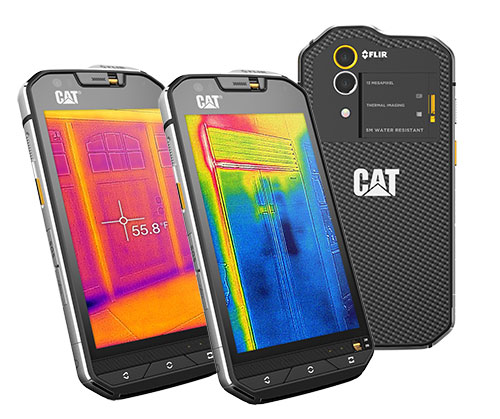 Tell us about the new Cat S60?

The new Android-based Cat S60 is the industry’s first smartphone to integrate a thermal camera. Cat Phones, a line of phones under the Caterpillar brand, is a leading manufacturer of ruggedized smartphones. The Cat S60, also completely waterproof, now becomes the premier phone in the Cat Phone lineup and the only phone in the world with a built-in thermal camera.

How do you use the thermal camera?

To access the FLIR thermal camera in the Cat S60, users will open FLIR’s @Work app that comes pre-installed on the device. Opening the app powers the thermal camera on and allows you to begin seeing the world around you in thermal, and to take photos or videos.

Who will purchase the Cat S60?

Anyone will be able to buy the Cat S60, but in particular, the same people who purchase ruggedized smartphones happen to be the same people that are most likely to use and purchase thermal. FLIR sells a range of thermal cameras to people for work and play, including contractors, electricians, plumbers, as well as first responders in police and fire. Generally speaking, people who need a device that can stand up to the elements, the occasional accidental drop, and who don’t want to carry a separate thermal device will love the Cat S60.

What were the technological challenges in placing a thermal imager into a smartphone?

Our Lepton thermal microcamera module was purpose-built for integration into devices like the Cat S60, so this was relatively straightforward. We faced our biggest technological obstacles three years ago during our research and development of the Lepton camera module that’s embedded into the Cat S60. Before Lepton, thermal imaging cores were both large and too expensive for mobile integration. Our goal with Lepton was to build a smaller core at a lower cost, and we accomplished that with Lepton. FLIR now has 14 of its own products that use Lepton, including the FLIR ONE and Scout TK thermal monocular. Today, we see the fruits of that labor now in the announcement of the Cat S60.

What does this mean for the thermal imaging?

The Cat S60 is an important milestone for FLIR and our industry. Our mission in being the World’s Sixth Sense is to bring thermal to more people around the world. By working with Cat Phone to embed a thermal camera into a smartphone, we’ve opened thermal imaging to more people to discover thermal’s benefits.

What does this mean for the FLIR ONE?

The FLIR ONE, our own thermal camera accessory for smartphones, remains an important part of FLIR’s offerings. With hundreds of millions of mobile devices around the world, there are people that simply want to keep their existing device, and the FLIR ONE is an excellent option for those people that want a thermal camera.

Will there be a day when we see thermal in every device?

We can certainly hope so, but similar to the introduction of the FLIR ONE, we view the Cat S60 as an important step. In many ways, the Cat S60 with a built-in thermal imager is another way to help us to continue to create awareness for the benefits of thermal to people around the world. We’re excited to see people create amazing new use cases with the Cat S60.

When can people buy the Cat S60?

The Cat S60 will be available later this year for $599/€649 (MSRP). Cat Phones will announce more details at www.catphones.com