The following diagram provides a high-level overview of the steps required to produce a panoramic image from Ladybug raw image output. The table below briefly explains the steps. The sections that follow explain the Color Processing and Stitching steps in more detail. The final section explains stitching errors and how to work with them. After raw (Bayer-tiled) images are received from the camera, and decompressed if necessary, they are processed into RGB images using one of the color interpolation methods specified. Most of the color processing algorithms available in the Ladybug API are explained in Different Color Processing Algorithms. An additional algorithm, “down sampling,” scales the textures of each image to half their size in dimension (and quarter-size in data), making it the fastest of all the algorithms. However, due to the nature of scaling down, image resolution is reduced.

Also during color processing, an alpha mask value is assigned to each pixel of each image. This value represents the opaqueness of the pixel and is used in the blending stage. Alpha mask values, in turn, are computed based on the Blending Width value that is specified when the application is first started. This value specifies the pixel width on the border of each image within which blending should take place. Alpha mask values for each image are saved as .pgm files in the \Point Grey Research\PGR Ladybug\bin directory. Adjusting the blending width after an application starts results in the creation of new alpha mask files, which can take some time, depending on the configuration of your PC.

Finally, falloff correction, if specified, is applied to the RGB image to compensate for the vignetting effect of the lenses. Vignetting refers to the boundary area of each image appearing dark relative to the center of the image, creating a shadow effect in the stitched image.

The six RGB-textured images are then transferred to the PC graphics card for stitching. 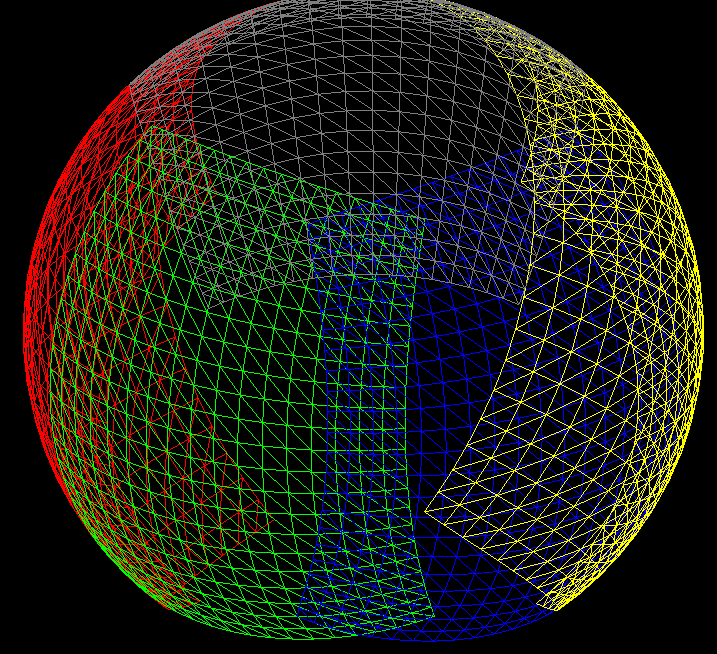 The coordinates of the polygon meshes are calculated based on calibration data, which specifies how to rectify, rotate and translate images. Because the textures also reflect the alpha values in each pixel, blending from one image to the neighboring image appears smooth. The result is that by transferring image textures to the graphics card, a single, stitched image is produced without consuming any CPU resources.

Dynamic stitching is a method of adjusting stitching distances along the seam by matching image content. This method may generate better results, but it is very computationally intensive and is not recommended for use during image capture.

Dynamic stitching does not work well if the image has repeating patterns (such as building windows) or a solid color (such as sky).

Users can set the minimum, maximum, and default distance used by dynamic stitching in LadybugCapPro (from the Settings menu, select Options). These settings apply to one-shot and automatic dynamic stitching.

Firstly, the various images that are combined into the panorama are not obtained from exactly the same viewpoint, but from slightly offset viewpoints caused by the physical separation of the individual camera lenses. This effect is known as parallax.

Second, in order to perfectly stitch images together, a range to the physical scene is required. However, since the Ladybug does not do range estimation, we do not have this value. To remove this unknown, we assume all points in the scene are at the same radius from the camera, effectively forcing the real world onto a sphere surrounding the camera.

When the true range is different from the sphere radius, a stitching error results. This error depends upon the separation of the lenses, the sphere radius and the true range. For ranges from 10 meters to infinity, a 20-meter sphere generally results in a parallax error less than 1 pixel in width, and therefore it is a good radius selection for most outdoor scenes.

Stitching errors manifest themselves as a ‘double image’ or ’image offset’ effect on the border areas between images. Typically, these errors are most noticeable on objects that are very close to the camera. For example, a ‘double image’ effect can be seen in the following picture: Some stitching errors can be mitigated by using Dynamic Stitching.

You can use the following equation to determine the pixel width within which a stitching error will occur, given the distance between the camera and the subject:

For example, if the calibration distance is 20 meters, the stitching error that results when an object is an infinite distance from a Ladybug camera is 2.2 pixels.

As discussed above, vignetting happens when the boundary area of each image appears dark relative to the center of the image, creating a shadow effect in the stitched image. If you enable falloff correction, the brightness of each image is adjusted so that equally-lit images appear flat in brightness. The side effects of falloff correction are slower processing time due to additional computation, and an amplification of noise in the image.